Meet Dr. Stephanie Walker, Associate Professor in Extension Plant Sciences at New Mexico State University and Extension Vegetable Specialist for New Mexico. Stephanie is passionate about vegetables, and this passion grew from her first job after gaining her Bachelor’s degree in Biology at NMSU. For 10 years, Stephanie worked for the Mountain Pass Canning Company [think “Old El Paso” brand]. At that time, Mountain Pass was the largest green chile / jalapeño processing facility in the world, and Stephanie’s first role there was quality control supervisor. Just think, if you were eating Old El Paso canned chiles or jalepeño back in the late 80s – early 90s, you were eating peppers that passed Stephanie’s high standards! 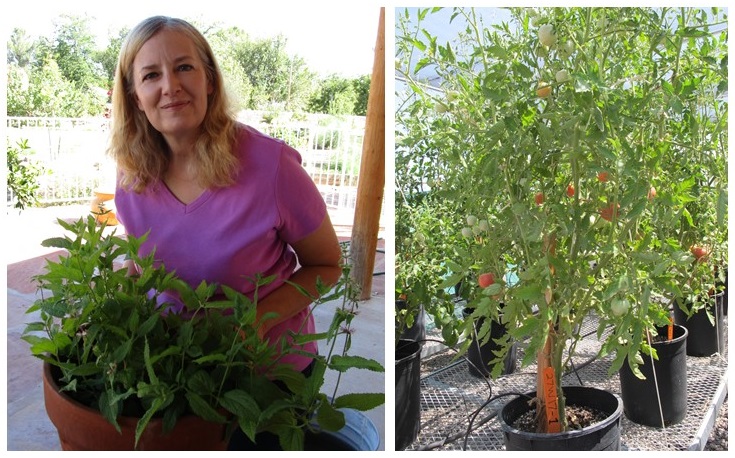 As an undergraduate majoring in biology, Stephanie really enjoyed genetics. At the Mountain Pass factory, she became fascinated by green chiles and jalapeños and would often think about which traits of these peppers could be developed to protect their quality during harvest and processing. These thoughts led Stephanie to apply for a Master’s Degree in Horticulture at NMSU. Then after her Master’s Degree, she took up an Extension plant science position while also pursuing her PhD. During this time Stephanie worked on chile breeding under Dr. Paul Bosland [famous as the “chile man”], and on sweet onions and paprika with Dr. Marisa Wall.

About the time that Stephanie was hired as Extension Vegetable Specialist, NMSU lost several long-term horticultural specialists. So, with the help of colleagues and growers, she has expanded her expertise beyond the typical New Mexico vegetable repertoire to some very unusual crops. In her spare time, she grows some very peculiar (and tasty) vegetables in her own garden and she eats them too, so that she can report on their palatability. Some of her favorites include the papa criolla a more nutritious type of potato than those usually grown in the U.S., the litchi tomato, and the Egyptian walking onion.

Stephanie is also interested in drought-tolerant vegetables, a particularly pressing subject given the long-term outlook for New Mexico’s water resources. Many of these vegetables are Native American varieties that indigenous peoples have cultivated for centuries before Europeans arrived on the North American continent. Some of the many drought tolerant vegetables that Stephanie has been trying out include tepary beans, cow peas, okra, asparagus, and several squash varieties. To learn more, check out Stephanie’s presentation on Climate Change in Vegetable Production systems.

Over the last few years, Stephanie has been working on a small, unfunded project to find tomatoes that can cope with the blistering New Mexico summers.  Stephanie muses that “tomatoes break the heart of many.” Here in New Mexico, if it’s not curly top, it’s the monsoon rains causing fruit to split and break. When daytime temperatures break through the 90˚F threshold, pollination plummets and fruit set can be non-existent. Then when it cools off in the Fall, tomato plants will set fruit like crazy only to be exposed to the frosts that usually arrive by November.

There has been a great deal of research on cold tolerance in tomatoes, but little on heat tolerance. So, Stephanie decided to work with Master Gardeners and other volunteers to see if they could find or breed varieties that could set fruit at higher temperatures. Initial results showed the standard beefmaster did well in the exceptionally hot summer two years ago. But this summer, their breeding lines performed best in producing the most fruit. Unfortunately, the flavor was a little disappointing. Stephanie’s next step will be to take their best producing line and back-cross it with a line with better flavor. If you are interested in being involved in the tomato project in 2018, here are Stephanie’s contact details.